In this section we will inform you about on-going projects - restorations etc., affecting 55 Squadron

On the Towline - the last two-point Tanker at work

XH 648 - on the day of the Association visit in April 2016, renovation began. We hoped she would once again wear 55 Squadron colours but the Museum official info says 57...

Nose Bomb-aimer position - used for stowing luggage in Tanker use...

XH 648 Cockpit, pilots' position - not an ideal view out for formation flying...

Member Jock Thompson, visiting Duxford, was in conversation with one of the renovators, who by great coincidence had been the observer in the Buccaneer, pairing  the one involved in the Buccaneer / Victor formation collision.

In April 2022,  XH648 still minus its tail surfaces and wing tips was moved from the renovation hangar to the display hangar in new polyurethane paint.

See also  this video report from ITV on the day. 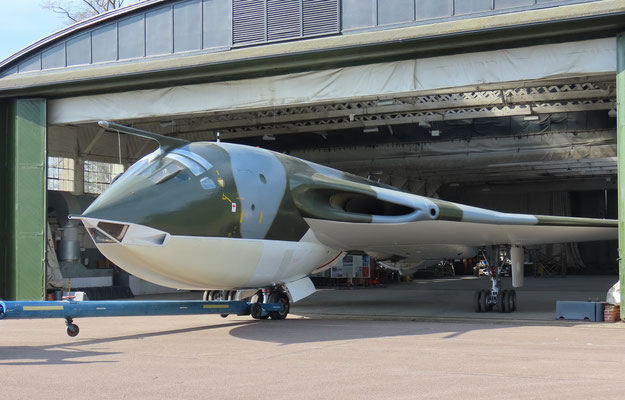 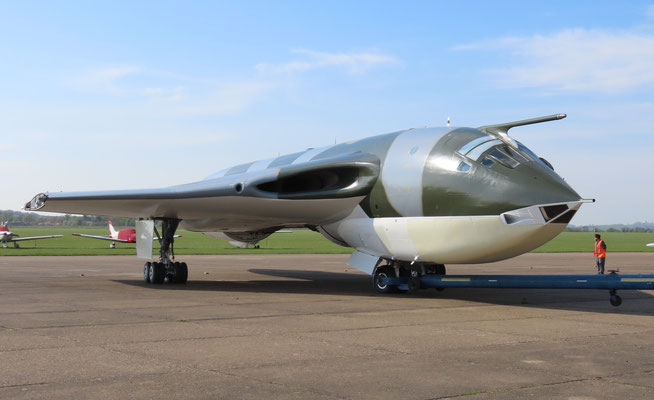 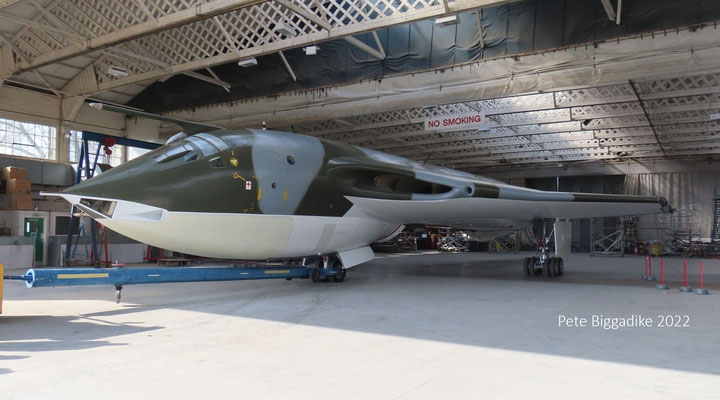 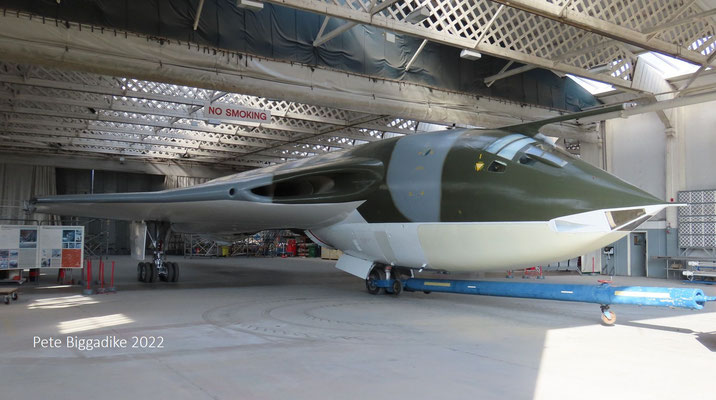 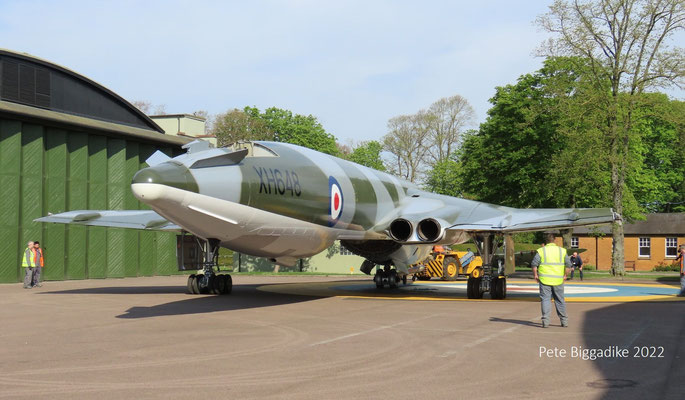 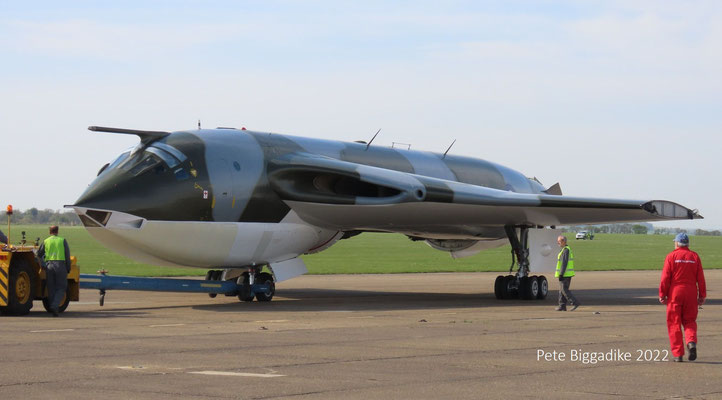 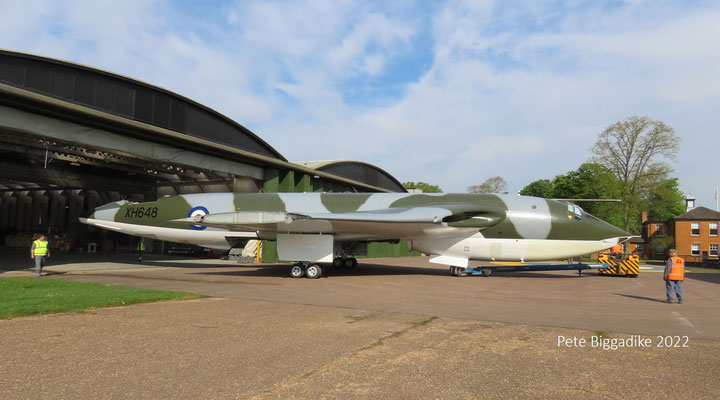 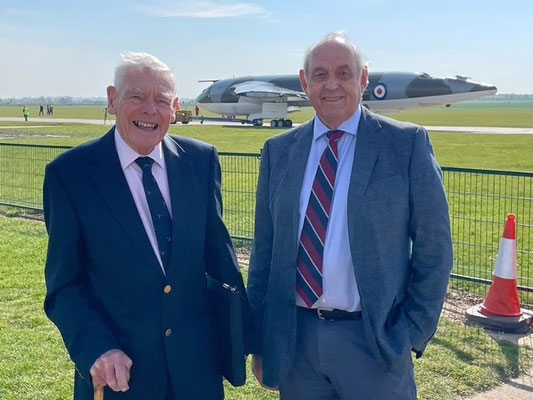 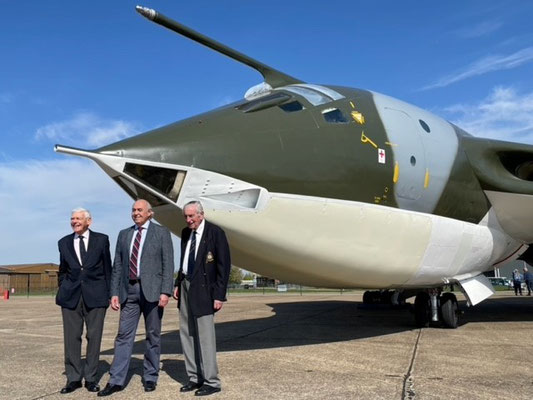 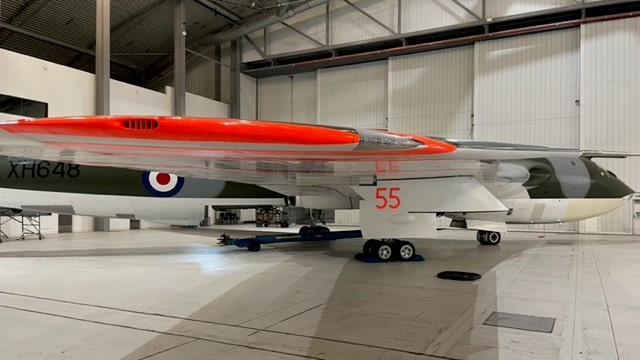 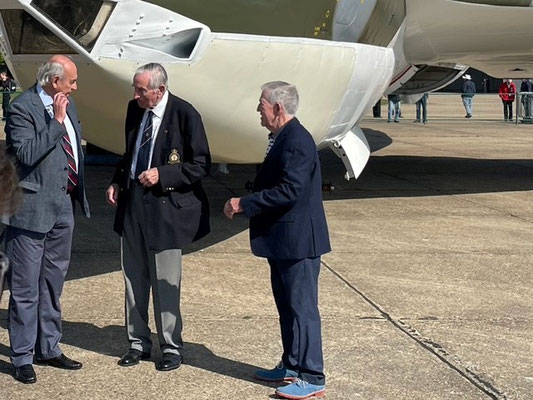 And what about those squadron emblems?

The following text and photos - with permission, from the Imperial War Museum Duxford website

Help us to conserve our rare Handley Page Victor for the nation.

The only one of its type in the world, Handley Page Victor XH648 is an important object in IWM’s collection. It is being conserved so that future generations can experience the Victor and the story it tells about Cold War conflict.

Following the movement of the  Victor into the Conservation in Action hangar, detailed conservation work has commenced on the aircraft.

Victor XH648 was originally built as a B1 model. Its first flight was on 27 November 1959 and it was delivered to No.57 Squadron at Honington on 21 December that year.

In October 1960, it returned to Handley Page at Radlett, Hertfordshire for conversion to a B1A status. This involved equipping it with new electronic countermeasure equipment, improved radio and radar equipment and changing the engines to Sapphire Mark 20701s.

Following conversion and test flights, XH648 was delivered to RAF Cottesmore on 11 May 1961 to join No.15 Squadron. Flown as part of the Far East Air Force during the confrontation with Indonesia in 1962-63. On return from Indonesia, XH648 remained with 15 Squadron until it was delivered back to RAF Honington to join 55 Squadron on 3 April 1964.

Less than a year later, in 1965, it was converted by Handley Page into a two-point tanker, making it a B (K) IA model. This involved the fitting of Mark 20B refueling pods under each wing. It then returned to 55 Squadron, who shortly afterwards moved to RAF Marham, where XH648 resided for the next ten years.

On 23 June1975, Victor XH648 was transferred to 57 Squadron, also based at RAF Marham, where it supported the Squadron’s final year as a Mark I tanker squadron. It was retired to Duxford on 2 June 1976.

We need to raise £450,000 to conserve the Victor and protect it so it can be seen and enjoyed by future generations.

How does the XH-648 story end?   See the report in the What's New? section

55 Squadron was based in Iraq for the period between the wars WW1 / WW2.  In addition to deaths from accidents and operations, there were also some tragic deaths resulting from desperation in the harsh conditions.

Author and Friends of 55 Squadron member Steve Johnson had been researching the site at Hinaidi and found, firstly that a large number of 55 Squadron members from this period is buried there - and secondly, that the site is in dire need of repair.  He is leading a project to motivate the Commonwealth War Graves Commission to undertake restoration of this historic site.

In November 2020 he had initial success, after lots of hard work and determination.  In November 2021 the renovation had progressed to the point that a remembrance ceremony could be held.  Details and Steve's reports below.

Work is progressing well at Hinaidi, with the basic structure of the cemetery wall due for completion by the end of this month. There will be a Remembrance Day ceremony on the 11th November, attended by Brigadier Adam McRae (UK Defence Attache, Baghdad), his deputy (a Navy officer) and a visiting Royal Air Force Air Marshall. Adam will arrange for wreaths to be made for each of the Squadrons with men buried at Hinaidi and he has asked me to obtain decent images of each of the squadron emblems. I notice you have the emblem for 55 Squadron on your website but it is not of high quality. If you are happy for a wreath to be laid at the cemetery on 55 Sqn Association’s behalf, would you please let me know and forward me a decent quality image as soon as you are able.

The good news is that funding has been secured from the MoD for the first phase of the cemetery restoration project, which will commence as soon as a small oil pipeline has been re-sited away from the perimeter of the cemetery and an access road connecting the Iraqi Military air base to the main highway that currently crosses part of the cemetery has been re-routed.

Contracts for the clearing of rubbish and the construction of a cemetery wall have already been signed with local contractors and will commence once permission to proceed has been given by the Iraqi government. Fingers crossed. The exact dimensions of the original cemetery have already been confirmed and a concrete wall will be constructed in the same manner and finish as the original perimeter wall. When the wall has been completed, the cemetery will be tidied up (headstone re-positioned where necessary) and an ongoing maintenance plan set in place until such time that funds can be secured for the second phase of the project, that of headstone replacement / restoration. It is a start, but there is a long way to go - and a lot of lobbying/persuasion to be done.

A lot has been going on ‘behind the scenes’ over the past four months re the Hinaidi project and I thought it would be an opportune moment to let you all know we are finally getting somewhere. I was informed yesterday that two contracts are in the process of being set up, quotes having been sought by the CWGC from several local Iraqi contractors back in in April. The first contract is for the erection of a block wall around the perimeter of the cemetery, with screed applied to try and replicate the appearance of the original cemetery wall (the CWGC has the plans). The other contract is for the ongoing basic maintenance of the cemetery. Part of the first contract will be to re-position the existing access road that runs diagonally across the south-eastern corner of the cemetery before construction of the wall can commence.

This is a great first step, but there is more to do, as there is currently no MoD funding commitment for the restoration of the graves and the re-making of the 299 headstones.

I am not at liberty to go into any more detail at this stage, but will let you know how the project progresses.

Attached is a photograph taken yesterday in Baghdad, where Remembrance Day was observed at the Ma’Asker Al Raschid RAF Cemetery (formerly the Hinaidi RAF Peace Cemetery)

by the laying of a wreath at the foot of the grave of Brigadier-General Sir Gilbert Falkingham Clayton KCMG KBE CB,

British High Commissioner to Iraq at the time of his death in 1919.

For more details, refer to the ’News’ section on my website:

I will update this website (link above) with photos and information, as the project progresses, but feel free to contact me directly if you have any questions or suggestions as to the best way forward.

I’ve found out more details regarding the graves at Hinaidi since I last contacted you in August and thought I would give you an update into the 55 Squadron casualties buried at Hinaidi during the time the squadron was based in Iraq. The number of 55 Squadron men (officers and ‘other ranks’) has increased from 22 to twenty-five (25) and if you include pilots who at one time flew with 55 Squadron, this number increases to twenty-seven (27), making 55 Squadron by far the most represented in the graves at Hinaidi and equating to almost 10% of all the graves there.

For the past six months I, with the backing of 6 Squadron RAF Association and the RAF Habbaniya Association, have been lobbying the Commonwealth War Graves Commission and the Ministry of Defence to allocate resources for securing the perimeter of the cemetery and restoring the graves to their former glory, a not unreasonable request since significant works are currently nearing completion at the RAF Habbaniya Cemetery, only 55 miles to the west of Hinaidi. In recent weeks, the MoD has conceded that it does own the land upon which the cemetery stands and that it will at some point ask the CWGC to inspect and carry out restoration works. The MoD has also assigned a senior staff officer to look into the case on behalf of the Defence Services Secretary. My concern is the rapidly deteriorating condition of the cemetery, as the perimeter wall has long since been breached and one corner of the cemetery is now being used as a short-cut to a nearby highway for Iraqi lorries exiting the Ma’asker al Raschid air base. If something is not done as a matter of urgency to at least secure the cemetery, there may not be anything left to restore when resources become available.

I would appreciate it if you would discuss the matter with your members and, if you collectively feel as strongly as I do that something must be done to save the cemetery at Hinaidi, to voice your concerns in writing to the officer listed below*. I will also be attempting to seek support from the associations of 1 Squadron, 6 Squadron, 8 Squadron, 30 Squadron, 45 Squadron, LXX Squadron and 84 Squadron, though, like 55 Squadron, 30 Squadron is no longer operational and communication with its association may prove difficult.

Though I am hopeful your association will be able to join me in asking the MoD to do something about Hinaidi, I fully understand if the size of the association may make this impractical.

Ed. As you see, this is a postal address.  Please send an individual letter to the Lt Col and mention your membership of the  55 Squadron Association.

Hopefully, together we might gain some momentum. It seems worthwhile.

This list is now in the In Memoriam Section. Ed

Although the hoped for Crowd Funding didn't get approval, we are leaving this article here in case you have some ideas...